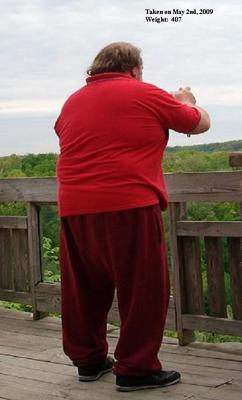 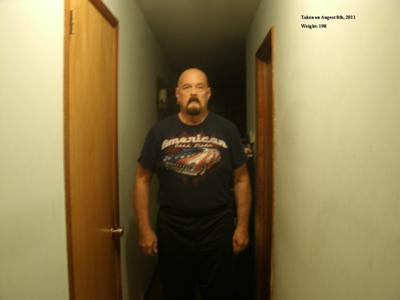 “Come in and have a seat”, the orthodontist prodded. “We will be giving you some nitrous to help get you relaxed”. I looked up at the clock to see the time was 7am. I moved over to the chair, balanced my cane against the wall, and all 417 pounds of me, settled into the throne of tooth extraction. I was doing well, but was very apprehensive about having all my teeth removed. I had no idea what was about to happen! “How long will it be before I wake”, I asked?

“Well, the nitrous will help make you go into dream world, but to entirely knock you out, I need something a little stronger”. Doctor Roberts pointed to the IV stand, and the two other assistants. “You’d normally be back awake in about two to three hours, but since you’re taking pain medication, it may be another hour or two”.

As I settled into a comfortable position, the nitrous mask moved toward me, covering my mouth and noise. I faded into a cloud of funny visions, and a strange world of floating things. It began to feel as if hours, even days, were passing, but without context or sequential meaning!

Then the wonder and fascination of my nitrous world faded to just black! Nothing more! Blackness with one small dot of light! The small spot of light grew larger and larger until it appeared as if an opening in a dog house. A K-9 dwelling, dark, damp, and I was trapped inside!

“I don’t understand why you refused to call an ambulance”, my wife scolded! “He was unconscious for more than ten hours, he could have died”!

The doctor worked to arouse me, again and again, but nothing. Yet he refused to call an ambulance! My wife was scared senseless, and started to reach for a phone herself. But then the doctor came back into the waiting room, and announced his success at waking me!

My mouth was full of blood that spewed down the front of my shirt. Droplets of blood fell from my nose, and ears. The part time nursing staff helped me to my feet, and with the insistence of the doctor, out the back door they marched me. The Doctor had another appointment that day, and was very late because of me, so my well being was never his real concern. Both nurses had to follow me all the way to the car, since I couldn’t, and probably shouldn’t be walking yet. On the way to the car I reached in, and removed the dentures. To this day I have never put them back! I did write the Maryland dental board, but nothing ever came of it. They concluded that the doctor acted appropriately.

It was this event that finally convinced me to abandon medicine, and dentistry in this country forever! I took back my life from our fouled medical system on May 19th, 2009.

I began my upward climb back to good, stable health, with the pledge to get off narcotics, lose weight, and manage my medical needs myself!

I started with the narcotics, since they were going to be the most difficult to deal with. Doctors have been providing me narcotic pain medication for over seventeen years! There were times I had over seven different kinds of narcotics locked in my safe, Hydrocodone, Oxycodon, and Morphine to name a few. My particular situation made it very difficult to remedy my symptoms, but it is also a tragedy that doctors think they should always have to. My pain was manageable without the use of narcotics, and my type of chronic pain suggests that doctors should have never tried to remedy it with narcotics.

After seventeen years of taking them, however, I was certainly, and without a doubt, addicted. I had to overcome this problem first! I tried to obtain outside help, but discovered there was none, other than the help I gave myself. On December 27th, 2009 I took my last narcotic, and have never once considered taking them again. But please do not be mislead, my pain is still very real, and there are times at night that I moan at the top of my lungs, in pain. This is, however, a much better life, than the alternative, being addicted to narcotics.

My next venture, in recovering my health, was to get the weight off and beef up. Walking was out, or any kind of aerobic exercise, since I suffer from Psoriatic Arthritis. I decided to return to basic calisthenics, and change the way I ate. I started with one push-up, one sit-up and one bicep curl. These first ones were the most difficult, and hurt the most. As I got stronger, though, I added more! The first days, and months were hell, but I was determined to change myself forever. I’ve been a fat guy all my life, and that was going to end!

Day after day I forced myself to exercise! Twenty sit ups, twenty push ups, twenty bicep curls as I moved up in numbers. I realized after a while though, something was missing. These exercises helped me reduce my weight, and strengthen my core, but did very little for my flexibility, balance, or sleep.

I needed another level of exercise, something that would help with my pain, balance, and perhaps sleep. I began to search for a teacher of, ‘Taiji’, but so many of the institutes of martial art learning are geared to breaking things, or beating someone up. I found it very difficult to find just the right Sensei.

Then in 2010, I found one of the finest Sensei in all the land. Her name is Barbara Feldman, and she runs the, ‘Blue Heron Martial Healing Art’ school. I began the beginner’s level, and started learning the art of relaxing movements, fluid-whole body connections and balance like I never had before.

I started down a path of Taiji (pronounced Tie Gee’) and found that it involved more than just one art. It includes the form, but also push-hands, and Qigong (pronounced, chi kung'). They’re all meant to improve focus, balance, strength, pain, sleep, and a multitude of other issues. It’s been so addictive for me! I intend to never quit. The form can even be practiced from a wheelchair, so if my arthritis ever gets that bad, I will be doing the form from a wheelchair.

As I moved upward in my goals, I discarded one bad thing after another. First I said to medicine, “No longer will you decide for me what should be done, I will learn, and then make informed decisions that only include natural remedies.” Then I tossed the pills in the garbage! Next I shed 214 pounds, giving me a current weight of 203, with a goal of getting to 190.

And then, I finally got started with martial arts, learning remedies everyday that can help my particular diseases. I live with, Arthritis, Hep-c, Diabetes, Fibromyalgia, Neuropathy, Epilepsy and Hormone deficiencies, but get up every day with tools to overcome it all. I see a doctor every six month for my hormones, everything else; I take care of, myself! I take a multitude of supplements, but research each and every one. I know what each does for my body. I manage my diabetes with diet, and the Hep-c is something that is just there. I have always been told that if I live a clean life, without booze, I will die of something else.

Yesterday, my daughter and I made a trip to the wellness center at Sheppard College. The wellness center is a fitness center, and employs fitness instructors as well as health professionals. Every last Wednesday of the month is, ‘free access day’, so I decided to get my fat index checked. I was shocked to find my fat index, average for my age! Average! My fat index has never been average; in fact, it has always been very high. Maybe 35 to 40 percent when I was my heaviest, but today it was just 18 percent. That’s right, just a tiny, little EIGHTEEN percent.

Well I’ve reached my weight goal and my weight now hovers between 190 and 205. I’ve shed my narcotic addiction forever! I take care of all my own medical needs, except one and use only natural remedies, except one. I go to Taiji class three times a week and work out three times a week. As my son often reminds me, “Dad you’re going to be healthier at sixty then you were at forty”, and he’s right!

But let me conclude my little story by telling you that overcoming the odds, and perseverance is my trademark. As Fredrick Niche said, “That, which does not kill us, makes us stronger”. But don’t let me lead you down the road of complacent frustration because anyone can do what I have done. Day by day, little by little, you work at it! You just don't ever give up! Then you turn suddenly around, look in the mirror, and find a different person! Someone you can now respect and live with, for the rest of your life.

A permanent return from, "Death's Dog House", never to venture there again!